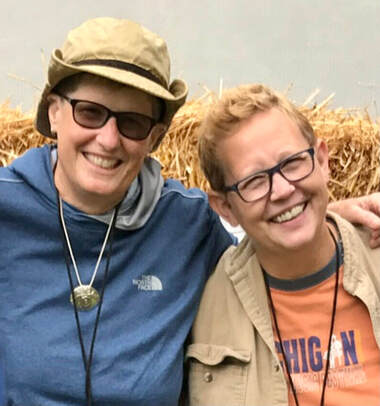 Ande and dorrie learned, and grew in love with, archery in the mystical woods of the Michigan Womyn's Music Festival.

We were on the archery crew at 'Fest' for five years and have since been striving to carry on the tradition of archery as meditation: focusing on something that’s important, significant, desired (an aim, a feeling, a goal); standing strong on the ground; connecting with whatever one connects with; putting one’s intention into the arrow, and loosing the arrow of intention toward one’s desire.

We love this approach to archery!

In 2015, we began providing archery at the LBA Ohio Lesbian Festival, and we very much look forward to rejoining all the fabby lezzies at that fest in 2022!

In 2016, we began an archery program at a farm camp teaching traditional archery to groups of 9-12 year olds during the farm’s summer day camp program in July.  Archery was later added to some of the farm's annual events like 'Sheep & Llama Shearing Day' and 'Harvest Day.'

In 2018, we got to pick up the Michigan Archery mantle from Falcon River and we began doing the archery workshops at the Michigan Framily Reunion. The archery space at MFR is truly magical and is one of our favorite places to shoot!

In 2019, we got to return to The Land of MichFest to teach archery at the 1st Annual "Singing & Playing on The Land" gathering. So cool!

In addition, we teach archery to individuals and groups in Ohio, Florida and Vermont.

We've had the joy of teaching folks from age 2 (with parent) to 85!

Archery is one of the most accessible activities we’ve ever found. There are myriad modifications that can be used to make shooting a bow possible, and we hope anyone who has an interest in archery will come try it out!

We are super excited about being with our tribe once again in the woods of Michigan! The Goddess loves her women and her maidens!